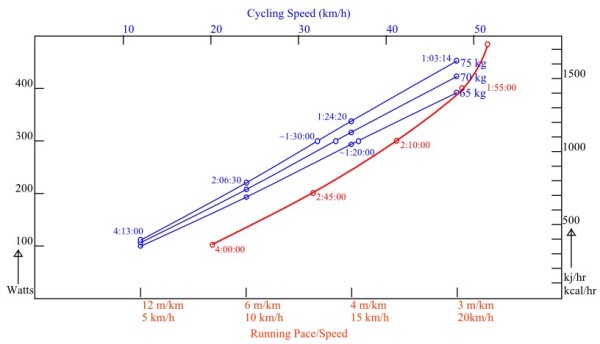 Again on the topic of pacing and energy/fatigue management in 70.3 or other long-course triathlons, I wanted to come up with a way of visualizing different pacing strategies and their relation to each other, and to roughly calculate how pacing might work in an abstract way. Clearly, I don’t think that the numbers I’ve come up with are going to be exactly the same as what will happen in the real world, but at the same time, I think the numbers I’ve crunched or estimated are very reasonable and shed some light on what an optimal strategy might be.

So, I have some good experience from training with a power meter for years what kind of energy expenditure is reasonable for me over the course of 2 hours (roughly the length of the bike leg), or 4 hours (roughly the length of a whole 70.3), and more and less than those durations. Even though endurance has been a strength of mine in cycling, I’ve never specifically trained to produce the most power that I can for 4 hours at a time, because that would be pretty irrelevant to the demands of bike racing. To that end, I think that there will be some room for improvement there, and I have ideas for how I want to try to accomplish that. In the meantime, we can just speculate about what I might shoot for on the bike and on the run in 70.3 races, though I do have the benefit of doing the Miami 70.3 on two occasions already, so I’m not totally in the dark about this, ha.

Anyway, you can see above the result of my consultation with some running calorie calculators and my estimation of time-trial speeds correlated with power. For running, the relationship between speed and energy expenditure is not linear, but close to it for the speeds in question. Cycling, on the other hand,  has a hugely exponential increase in power requirements as cycling speed goes up. Namely, running 8 mph (7:30/mile) requires about 80% the energy expenditure as running 10 mph (6:00/mile). Cycling 25 mph (~280w) requires only about 2/3 the power of cycling 30 mph (~400w)!!! That’s not fair!

So what does that mean? Where is it easier to save time in a 70.3 event?

If we have a 70kg/154lb athlete, then it may be very challenging to ride at 325w, but maybe 300w is reasonable. This may equate to about 2:14 on the bike leg. On the other hand, the same energy expenditure on the run will probably yield a 1:20 run leg, give or take.

Just for kicks, I’ve also included below some rough estimates I entered into a spreadsheet as I’ve been thinking about these issues and my goals in training for 70.3.

Anyway, I’m thinking about it, but really, only time and experience will tell. I still like to have an idea of what I’m shooting for, and perhaps some of this is interesting or useful to some of my readers. I hope so. 🙂